New radio network deployment will be a mix of both distributed and centralized RAN architecture with virtualised components to meet stringent access requirements. Coordination among the nodes will be the key.

To work it out, network infrastructure will have to support many additional bands along with existing ones at air interface, however there is a need for revolutionary reworking of RAN architecture which so far consists of Single Node (eNB) in LTE or Dual Nodes (NodeB/RNC pair in 3G; BTS/BSC pair in 2G). 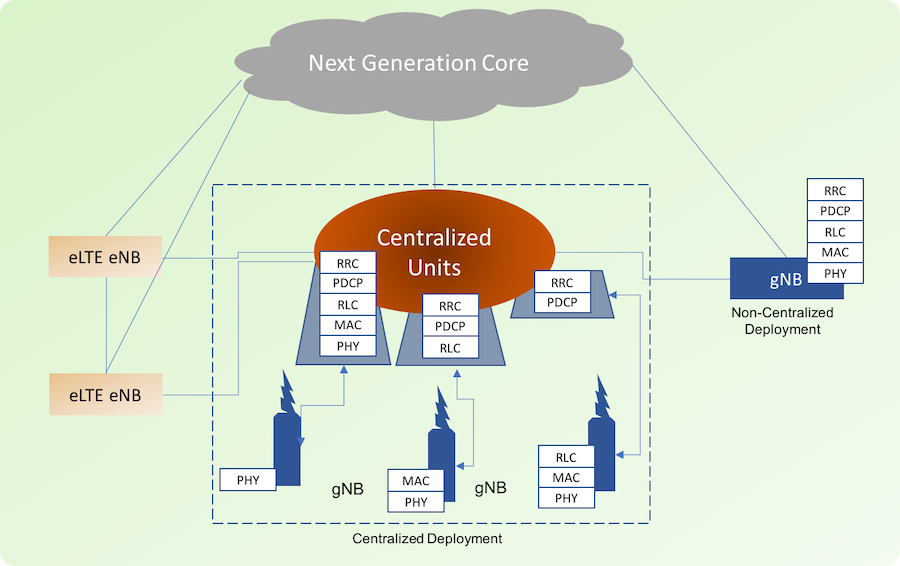 5G RAN architecture evolution will allow Control-plane/User-plane separation and support different options and flexibility for splitting the RAN architecture to enable context-aware service delivery and low latency services. The design will allow the deployment of new services rapidly and efficiently.

5G RAT consists of eLTE eNBs (evolution of eNB that supports connectivity to EPC and Next-generation 5G Core) and gNB (5G New Radio) which can be deployed under different configurations/scenarios.

With non-centralized deployment (i.e. distributed), complete protocol stack is on gNB and it will be suitable for macro deployment or indoor hotspot environments.

With centralised deployment, upper layers of the 5G New Radio stack are centralised. Protocol split between Central Unit and lower layers of gNB nodes depends on the transport layer.

The splitting of NR functions will depend on QoS settings requirements as per offered services e.g. low latency, high throughput or based on load/capacity need of a geographical area. Architecture should be flexible enough to move RAN functions between the central unit and distributed unit accordingly.

With NFV as a choice to implement NR functions, 5G is all set to make flexible and dynamic split architecture a reality. The inherent capability to instantiate network functions on demand, NFV driven 5G architecture will allow dynamic interworking between cells and enable the real-time radio coordination based on the degree of RAN centralisation and the transport network capabilities.

A Brief Summary of...

One of the key features of data service is session...